I started brushing up on python recently. In actuality there was not a whole lot of brushing up to do. In fact, the process was fairly straight forward. I remembered the syntax and most of the basic concepts behind the language. I also started working on a “List Cruncher” for http://www.onethirtybpm.com (a music site which I co-founded, but currently am uninvolved in).

While being updated on the status of 130BPM I was told of the horrors of compiling the year end lists (out start of next year due to maintenance). I decided to use my knowledge of python and try to offer up a solution. They maintain all of the information on Google Docs Spreadsheets, add weight and crunch the numbers by hand.

What I decided to do was take the Google Data API (which is not well documented, especially by Google standards) to retrieve the spreadsheet as a csv file and then crunch the information from there outputting the final list. So far the process has been straight forward, but the documentation is holding me back.

I also discovered I need to work on documentation myself. I need to start reading up on that. Updates on this project will be coming (and the source code should be released under some open-source license) to GitHub soon! 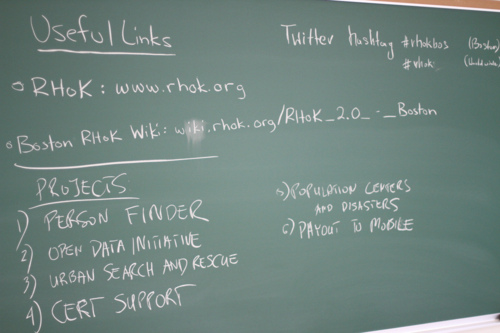 From 10am to 6:25pm on Sunday, December 5, 2010 I spent my time on Boston University Campus—in CAS—ignoring my homework and hacking away at a good cause.

When I first walked into the room I was unsure what was going on. I signed in, got myself some much needed coffee and settled down with my laptop, ready for whatever was to come next. To be honest, I had no intent of going the previous day, because I felt that I just had too much homework to waste 8 hours hacking away. However, I decided to go for a few hours, I ended up staying the whole time.

Once the event got rolling we broke up into small groups and decided what projects to work on. One person worked on the Google People Finder application—which seemed like it would have been cool to work on—and most of the people there worked on the Open Data project, because it was not code intensive. My friends and a few stragglers latched on to the HeightCatcher Android application.

The concept behind HeightCatcher is to be able to measure the height of a baby using a photo on a mobile phone. We chose Android as our development platform, because it is all open source. There were some issues with the actual how to, but we tried anyway. None of the people in the group worked on Android development before and most of us were rusty on our Java, but we sat there hacking away.

My job was to get the input from the user, do the distance calculations and compare the reference object with the baby to give a measurement. I achieved this after a lot of hacking around, but it was far from an elegant solution. We packed this all up onto dropbox (our rudimentary version control) and went and gave our demo of what we accomplished today. A day later I found out that the guys in Birmingham, UK finished the app… or rather started it a little before us and came out of it with a finished product. It was fun to try to make the HeightCatcher, but I am glad that it was made, because it is an application which has tons of application in disaster control and 3rd world countries!

Random Hacks of Kindness was definitely a good experience! Do it when it comes to your area.

I am currently working on HeightCatcher at Random Hacks of Kindness. You can follow what my group is doing on my twitter (http://twitter.com/#!/cjwoodall92). I will give an update of our progress as the day goes on and and overview on this site when we are done.