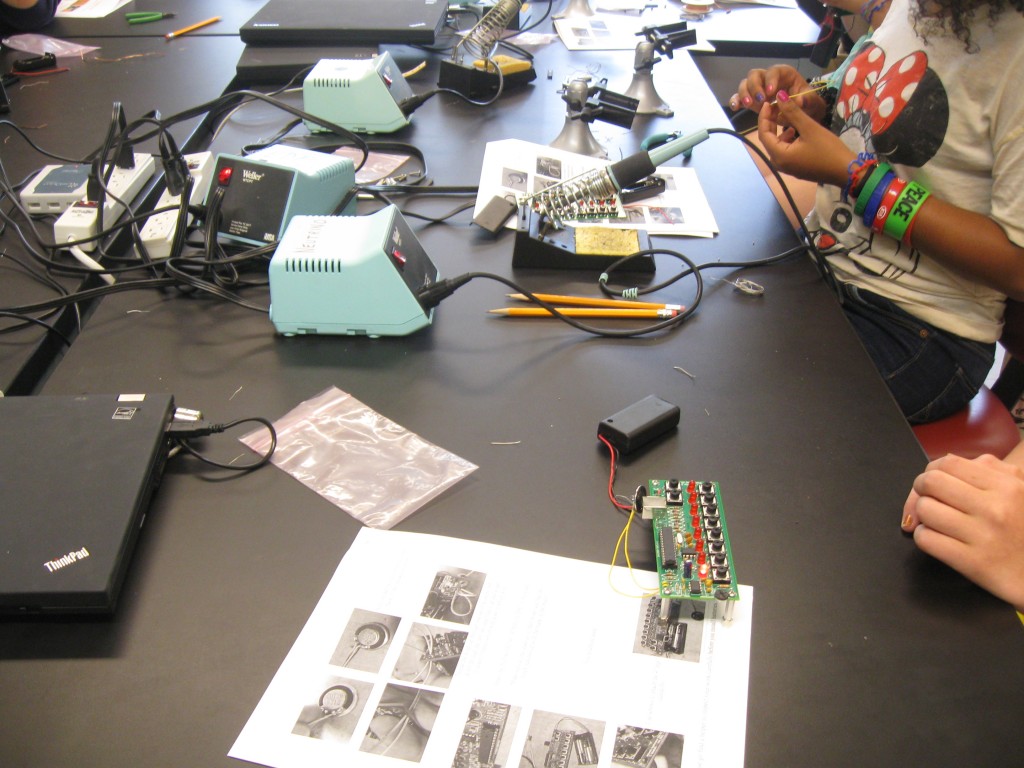 We decided to develop a project of our own on June 12, 2012. At which point we presented a few basic options for the project. The two competitors were a Game of Life simulator or a synthesizer. By June 15th we decided on the synthesizer, ordered test components, decided on the ATMega328P and were ready to start prototyping.

The Arduino was used for prototyping purposes.

The audio amplifier was prototyped on perfboard by June 20th and written up here. The TDA2822 test was successful, but the volume output of the speaker was low and as would be noted later was not very impressive

The MCP4921 was prototyped and documented here. The process was very swift and there were no major problems. Powering the SPI bus from the Arduino which was 5V based required power limiting resistors.

Most of the schematic layout was done during the prototyping stages in KiCAD. KiCAD was very easy to use, but I needed to upgrade to the latest version in order for it to be especially usable. Schematic layout went without a hitch.

PCB layout started once all the parts were chosen a bill of materials was made up and everything was laied out. PCB orders went out to Sierra Circuits and after some tweaking to their rules and limits we were able to print with them. However, upon receiving the boards there was one trace shorted to the 3.3V plane making the USB bootloader unusable on this board. This problem was limited to one board and after testing most of the rest was not reproduce-able. In the future, I would increase the boundary between traces and planes and possibly avoid power planes for simple designs.

There were some funding problems since the PCB boards ended up costing around $15 per and parts also costed nearly $15 per board. The parts cost was rather
high for this project and an inspection should be carried out to find cost reductions for future revisions of the board.

Firmware development went well. Code could be better commented. Needs to be cleaned. Make sure comment frequently in future projects and write libraries for the various "peripherals" you use (internal or external). If you have good interfaces/drivers then other people can use your board even if your base firmware is a little sketchy.

Also, figure out a way to formalise different program states/tasks/programs with efficient memory management. First time using interrupts heavily. Make sure interrupts, especially timer interrupts, are small. There are times when interrupts can be lengthy, but be cautious and evaluate everything that could happen while that interrupt is happening and make the system as robust as possible.

Packing went smoothly, but took a lot of work. Need to make sure you put exactly the right number of parts in. To many confuses people and to few makes the kit
impossible to complete correctly.

We also found some bill of material errors. Always check your footprints!