Water Light Graffiti by Antonin Fourneau, created in the Digitalarti Artlab from Digitalarti on Vimeo.

When art and electronics meet some very beautiful things can be born. Here Antonin Fourneau made this wonderful piece, basically a wall of circuit boards with LEDS, when exposed to water the LEDs light up. A friend of mine came to me immediately after he saw it and asked me how it worked, so I took the time to do some experiments of my own and am currently working on making my own Water LED Graffiti display with the BUILDS hackerspace at Boston University.

I gave a basic explanation to Kawandeep Virdee with New American Public Works over The Sprouts mailing list, another space in Boston, to explain some of the engineering behind Antonin Fourneau's amazing art piece. His writeup can be found here:

Basically there are two exposed pieces of metal around each LED (that correspond to each LED). Water is all pretty much conductive, due to the fact that water ionizes things, and as water is splashed onto these metal contacts you will have an decrease in resistance and allow current to flow through the LED. All said and done, taking some measurements you generally wont get much lower than 100k, but it is geometry dependent. However, for many LEDs, especially super efficient super bright ones, this is enough current to get a pretty bright light coming out of them (we attempted with a small pad 1206 pad on a PCB we had around and a super bright 3mm blue LED).

Read on for more.

How Does It Work?^ 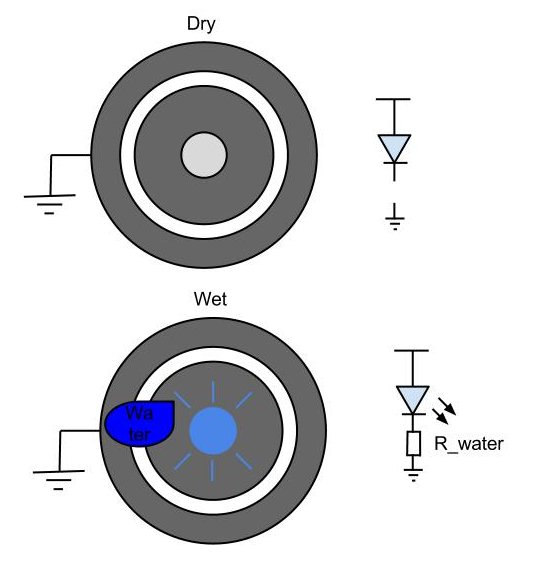 Above is a little picture to try to illustrate the point of how this beautiful bit of electronics/physics works. Some will call it dirty, but I think it is simple and very very neat.

Pure H20 is non-conductive; however, lucky for us pure water is practically non-existant. Water has a strong tendency to ionize things in it and these ions are very capable of ferrying electrons through water. There is some science to be read on the conductivity of water, but basically it is going to depend on surface area and how many low resistance paths you have. So if I take this water and splash it all over the pads there will likely be some water making contact between the two pads. You can imagine this as one big resistor being soldered down between the two pads. So the LED will turn on because current can now flow through the resistor/water. As we add more water, we add more paths and the LED can turn on a little brighter.

It is important to note that we are working with resistances in the 10k-1M ohm range, depending on geometry and the ions in the water. There is very little concern about blowing up the LED and experimentally we have observed the LED operating with water at 5V. All said and done, the brightness of the LED is going to depend on the internal physics of your specific LED, but generally very efficient LEDs will work the best (very little current can drive them at high brightness).

Before ordering the final set of boards we decided to order a test run, to reinforce our layout method before we made the final run of boards. The plan right now is to make a 1m x 1m panel made up of 100 10cmx10cm boards. We are hoping to gather some funding and money together to make this a reality going forward.

Each board needs 16 3mm LEDs. We are using some that we found in BUILDS, which were bought for a now defunct massive LED cube project from china.

Board-to-board connections will be made with wire jumpers and reinforced with adhesives if necessary. 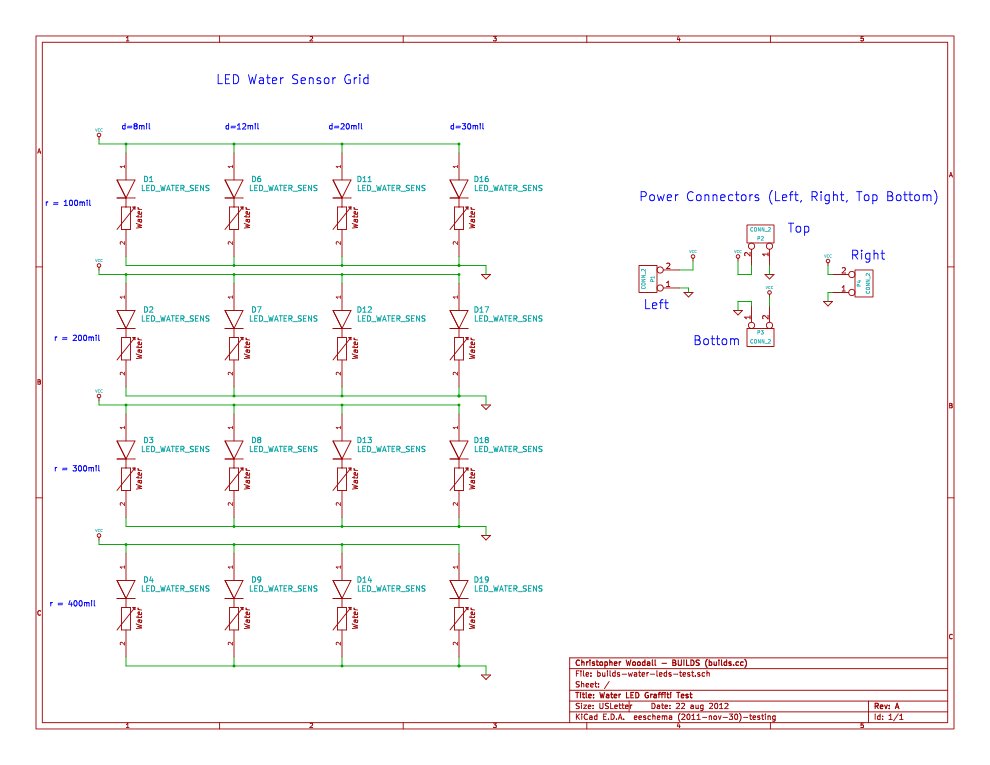 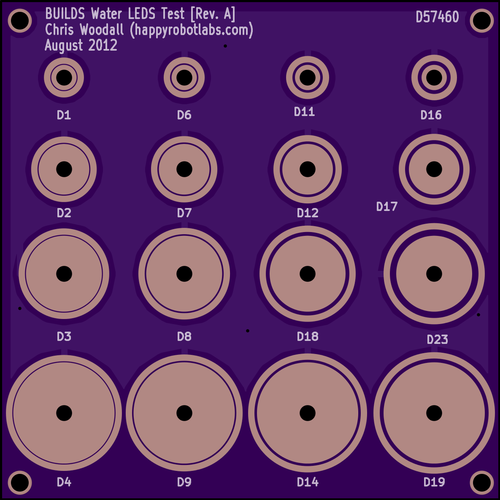 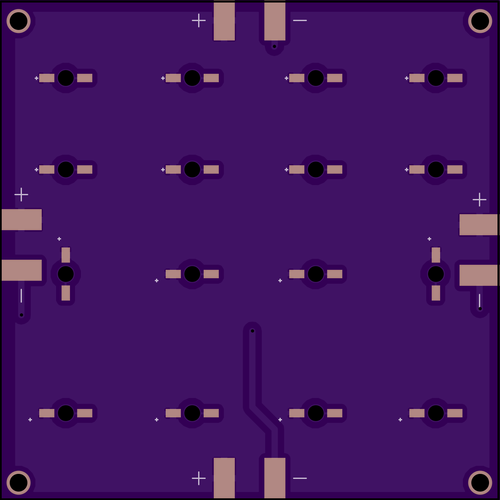 Everything I have done is available on Github. It is all open to the public, make as many as you want. However, these current designs are untested and are not production runs, simply to decide on a size.

All Schematics and PCB layouts were done using KiCAD.

Thanks to Antonin Fourneau for the inspiration. These water sensitive LED panels are super cool and I really like them as an input device for both art and electronics. I plan on continuing to experiment with them, but I wanted to thank you and your team for the inspiration. I would like to leave the readers with their video going over the project. It is in French, which is why I needed to redo most of the research.