I am currently building an LED Watch. In a previous post I specified some of my design parameters and a drawing of the design. Since then I hammered out some more details.

The overall BOM price of one LED Watch is $6.42, with the most expensive components being the Battery and the Microcontroller, both of which decrease in price very fast in larger quantities. The board order form Seeed or Itead would cost closer to $1 per board and accounting for shipping, which in large quantities is not that much, I can get by selling at a price point close to $15 or $16 and still doubling the BOM cost. I am not sure if I am actually selling these watches, but I do know a few people who expressed interest in learning surface mount soldering with this kit. I may make a small run. 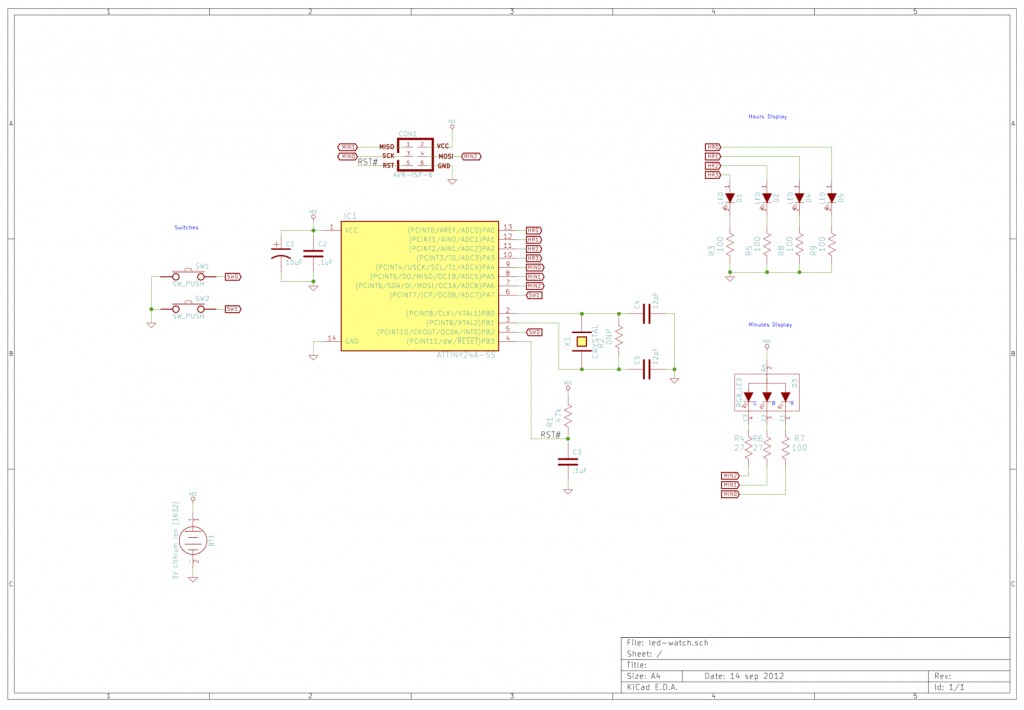 The PCB layout was done in KICAD and the prototypes were ordered from OSH Park. The cost of the PCB order was $11.50 for 3 prototyping boards.

Having coded none of the software thus far, there are certain parts of the design that are mostly theoretical. For example, the techniques used for sending the ATTiny24 into its sleep mode has yet to be fully designed, but I do have a basic idea of how I am going to approach the problem, when the boards come in.

The LEDs have resistors designed to limit there current to 5mA to 10mA. This will be confirmed and adjusted experimentally. I used the Shockley Diode Equation and python to come up with my results for resistor values. However, I am not confident in my calculations and I will publish corrections, code and the like once I have verified the current flow.

There are two buttons hooked up to their own individual pins. One of the two buttons is hooked to an INT0 pin, which could be used to wake up the watch from a deep sleep. However, due to the way the watch timer is being implemented the ATTiny24 never goes into a deep sleep mode. One might implement the deep sleep mode for a long term super low power consumption mode.

For the watchband I am using is a military surplus band from Rothco. However, the watchbands are actually the most expensive part of the watch at this point in time range from $3.00 to $13 depending on a variety of things. The main problem from a supply line point of view is where I am going to get watchbands from.

An example of the style can be found on Amazon

The battery being used is a CR1632 which is a Lithium Coin Cell battery that outputs 3.0V and has a total capacity of 130mAh and has a diameter of 16mm (.630 inches), which fits perfectly under the PCB board and the watchband (which is 18mm).

The clocking system is in effect a 32.768 kHz crystal oscillator driving the microcontroller. Inside of the clock there a Timer/Counter, which can be used to count up to 32,768 (1 second). The second to minute to hour counters will all happen at that point.

The ATTiny24A has an idle mode current of 33uA at 1.8V 1MHz. Given that the watch is operating at 3V, but also at a much lower frequency (32.767kHz) using 33uA as a baseline current draw makes sense. Assuming worse case (all peripherals active in idle mode) with no display use, the watch should last for about 328 days. Given more use of the LEDs, though for very short periods of time I would estimate a life time closer to 200 days or about 6.5 months.

One thought on “LED Watch 2: The Prototype”